On the latest album, The Spy Detective Collective, Guitarmy of One looks to the crime and intrigue shows of the ‘60s and ‘70s for inspiration as well as for dashes of melodic and cultural source material. Guitarist Scott Helland traces his love of instrumental music all the way back to his childhood immersion in The Rockford Files, The Man from Uncle, I Spy, and others. In the tight-lipped, complex, and solitary characters celebrated in those shows, Helland finds an analog for his own go-it-alone forays into stylish post-punk guitar composition.

“In those shows, there always seemed to be one standout person to carry the story, and I like the self-sufficiency of that,” Helland says. “After playing in bands for so many years, I love the idea of getting it all done by yourself. So there is some weird parallel between how I present this solo music and the spy woman or man doing the same in their field.”

In a bit of coded intrigue, Guitarmy of One’s song titles all contain the word ‘one’ buried in them. Some songs are dedicated to singular heroes of the genre: the ominous riffage of “Perry Mason Exoneration” and the moody, Eastern-Euro tinged spy rock of “Emma Bella Citronella,” an homage to Emma Peel of The Avengers. Other songs conflate multiple titles and characters, leaving a referential riddle for the listener: the shimmering, tuneful “Overtones of Hercule and Holmes,” the brash and driving album opener, “I Spy the Prisoner.” 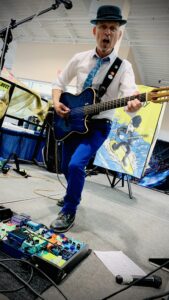 Described by BigTakeOver magazine as “an accomplished ex-punk who has made the striking transition to atmospheric soundtracks,” Helland weaves his mysterious and generous acoustic-electric melodies over propulsive spy riffs and electro beats, layering and building patiently toward engrossing payoffs.

This is the same instrumental voice he drew on in Guitarmy of One’s previous high-concept record, Never End the Rocket Century, and in Helland’s mainstage project, the exotic and prolific post-punk cult duo Frenchy and the Punk. But on The Spy Detective Collective, the period ambiance of the ‘70s is palpable as Helland explores the cheeky, dark and playful nature of Spy and noir melody, always within the frame and through the lens of his unique take on instrumental post-rock.

“About 70% of these songs were written over the last few months during this pandemic,” he says. “Engulfing myself in the writing process has helped me to deal with the strange reality of not being able to tour and play shows, which has been my livelihood for so long. The confusion and uncertainty of this time may very well be what birthed the whole spy theme. It gives me the chance to be serious about being silly, and vice versa.”

Scott Helland can be considered a seminal figure in the American underground. His Massachusetts high school band was Deep Wound, a punk quartet he co-founded with J. Mascis and Lou Barlow, friends with whom he still frequently performs. His own path has taken him far afield of punk rock, but the concision and urgency of punk remains a vital part of his vision, no matter how exotic and ambitious the tunes have become.

"Scott Helland's Guitarmy of One will strike a chord with those schooled in '60s-era surf rock and Henry Mancini themes."
PopMatters

"Helland adds colorful, complementing guitar lines that hint at flamenco almost as often as they do at Ventures-style surf-rock."
PopMatters

"This is a joy-filled and oddly flirtatious little record from start to finish. Helland has tapped something interesting and, dare we say, magical on The Spy Detective Collective."
PopMatters

"Helland’s prolific songwriting has yielded him over 30 records since the ‘80s, ever since that fateful flyer fell into the hands of lo-fi heroes, J Mascis and Lou Barlow."
Grateful Web

Fans like this writer, of Spy and 60s detective movie and TV show themes have itches deeply scratched here, along with components of surf (occasional echoey fret runs) and strong Spanish flamenco stylings and intricate blues-folk patterns that Django Reinhardt might admire.’
The Big Takeover Magazine